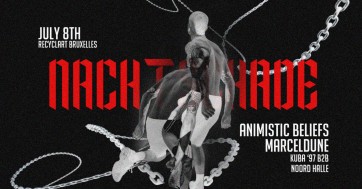 An experimental electronic music artist from the Athenian underground scene. DJ and producer, she builds her productions by combining
modular synthesizers with analog & digital sounds in addition to field recordings, including various techniques and knowledge she learned from jazz studies and opera singing. She mostly draws her inspiration in the underground scene, how people try to express frustration, society’s oppression through music and dance.
Her music is a perfect blend of fast-paced beats and abstract, woozy sound design. Raw and intense, sometimes chaotic, her DJ and producer skills shoot her off to the Greek foreground before relocating to London in 2020 to get closer to the city's diverse and raw street-style culture.
Affirming a unique style behind machines and decks, she is yet always
experimenting new sounds, creating new ways of expression. Strongly supported by Boiler Room and signed on labels such as Repitch Recordings, Low Income Squad or SUMAC, she is one of the most promising artists of her generation.

This duo are inventing a new, creole musical language. The Rotterdam-based artists repurposes forms from IDM and Global Club to create exhilarating hybrids, applying a fresh perspective that is both deeply personal and political.
‘Animism’ is the idea found in indigenous belief systems that all objects, creatures and places possess a spiritual essence. Pre-colonial thought, traditions and music connected with Marvin’s Moluccan and Linh’s Vietnamese-Chinese heritage are key inspirations and tools through which the duo explore their experience as queer POC living in the Netherlands.
Shared introductions to dance music as underage attendees of Rotterdam's club scenes and a passion for analogue equipment were the initial catalysts to Linh and Marvin’s collaboration. Early on they would meet regularly at a group for hardware enthusiasts, where they’d solder together their own hardware from scratch. Techno, electro, gabber and punk formed the initial backbone of their sound, but as the duo rediscovered traces of cultures that conventional history had erased, South-East Asian tonality, tribal rhythms and texts and poetry have become central components.

Versatility is a virtue and Kuba’s record collection is just that: versatile. Engaging with an audience is his first focus. His sound will differ from set to set, juggling tempos and moods, Kuba has what it takes to translate his own story to the dancefloor.
The Horst Festival and nacht promotor will get behind the decks with BAKK Den Haag musician and Nachtschade resident Noord Halle, who is arising from the outskirts of Brussels as a young and promising source of hard to beat fast paced electronics.