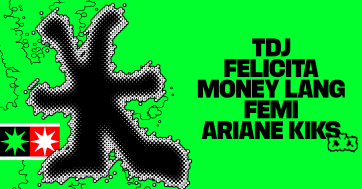 TDJ (CA)
From melancholy to bittersweet euphoria, TDJ's vaporous and acidulous universe is an incongruous amalgam between her first emo guitar ballads, under the alter-ego RYAN Playground, and her first kicks arranged on a pirated version of Fruity Loops.
TDJ is therefore the materialization of the first loves of the young suburbaner, now Montrealer, Geneviève Ryan-Martel, for techno, trance and eurodance; especially for the classics signed by Tiestö, Gamemaster, Signum or ATB, but also for her overly-listened to CDs by Blink-182, From First To Last, Taking Back Sunday. Surrounding herself with collaborators such as X-Coast, Panteros666, Paul Seul or Krampf, TDJ takes a malicious pleasure to make dance floors sweat, as to smear with neon, but always with a little touch of mascara, Bandcamp and other Spotify, to the great delight of her joyful audience.
From her debuts in 2019, TDJ conquered the old continent by joining the mythical Casual Gabberz with the track "Can't Stop Ravin". Followed up by "Nana" in 2020, then "All I Want For Christmas Is An Acoustic Guitar" in 2021. Gabber and trance, with finesse, on the "Meilleurs Vœux" compilations of this iconic label and collective.
Her first trance EP "TDJ001", which includes a video clip for the track "Quest for Glory" directed by Martin C. Pariseau, releases September 2020. Then it’s the turn of theexplosive eurodance "TDJ002" to cement her universe: a sweet memory of a partially forgotten party. A particularly catchy and touching nostalgia ensues while watching the video clip for the track "Lalala (Want Somebody)", directed by Kevin Elamrani-Lince and released in July 2021.
As a direct follow up to her two EPs, and by surrounding herself with artists dear to her heart, she produces her first concept compilation "SPF INFINI"; the soundtrack to a new genre 38-minutes music video signed by the unmatched director Laurence 'Baz' Morais,
released in September 2021. Seemingly unstoppable, with all eyes (and ears) on her, a tangible and permeable excitement gravitates around Geneviève. TDJ123, released in June 2022, heralds the culmination of a TDJ in all her resplendent bitterness; a level of maturity and solace in recollecting the past while recognizing the vulnerability of confronting the future.
By balancing the personal with an exuberant lightness, TDJ123 is hyper-saturated with songs that will be the soundtrack to every summer party and break-up slump.
+

felicita is an Anglo-Polish artist and music producer, signed to the famed electronic pop collective PC Music.
Twisting and contorting 21st century pop into high concept, hallucinatory sonic experiences, they have collaborated with A.G. Cook, Caroline Polachek, and TommyCash, and produced commissions for Balenciaga and misbhv. felicita’s debut album hej!, described as a ‘surreal opus’ by The Guardian, was released by PC Music in 2018, with marzipan, a haunting interpretation of an old Polish lullaby. The accompanying dance piece soft power, which set traditional folk
choreography to hypnotic sound design, toured London, New York, and Warsaw. After a creative period spent living in Shanghai, developing new ideas, DJing, and throwing parties, felicita has now returned to their original London base. 2022 will see the unveiling of a new body of work, spanning electronic pop, visual production and a brand new live experience.
+

FEMI (SE)
Femi is a DJ from Stockholm, where she’s been organising club nights over the past couple of years and is currently working with playlist curation and talent scouting at Swedish record label YEAR0001. Her sets are distinguished by fusing club sounds from various eras into a melodic blend of euphoria. Trance, techno, ambient, breakbeat, it does not matter what corner of the genre spectrum she pulls her tracks from, they will be blended to perfection.
+

ARIANEKIKS (FR)
Arianekiks is a French, Brussels-based photographer. Along with performing pop ceremonies together with City Links under the moniker “Atopos”, she hosts the radio shows veil01 (Internet Public Radio) and *xwishes (Lyl Radio). Kiks’ endeavours in music and photography are shaped by and crafted as stories of their own. Audiovisual tales rooted in teenage reveries, hypnotic motion and a clash of classical concerns —
23:00-05:00
10€ (presale online)
_
FACEBOOK EVENT
_
Discrimination, abuse and harassment of any kind will not be tolerated.
If you don't feel safe, please reach out to our staff. Look out for each other.
<3
Get informed about drugs, be aware of the effect of these substances on your body and mind.
Care for yourself and others around you.
<3
Denk aan onze buren. Pensez à nos voisins.
Please be quiet when going out and don't throw your trash in our streets.